Welcome to the home of the Royal Lego Fire Department!

The Royal Lego Fire Department was founded in 1930.  The current building was built in 2011 and is home to 11 companies.  Quint 2 is the station's most active unit, averaging seven runs per day, while the other units average four per day. 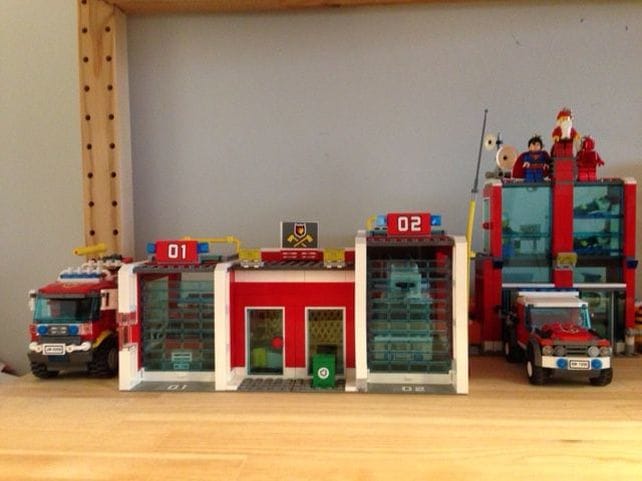 The station as seen from 127th Street

We are now affiliated with the International Association of Lego FireFighters (IALFF)! We are Local 431. 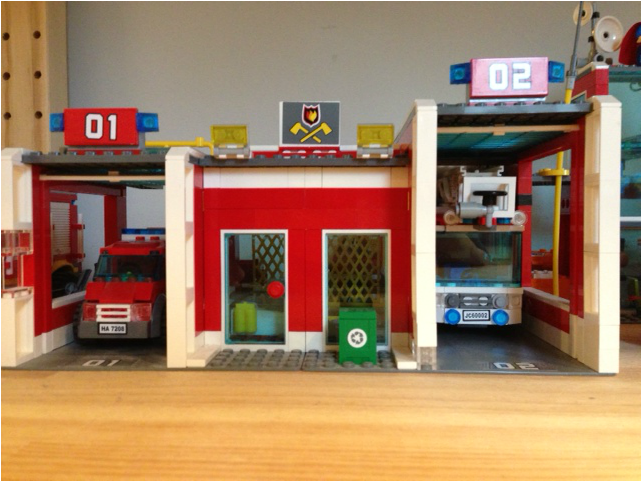 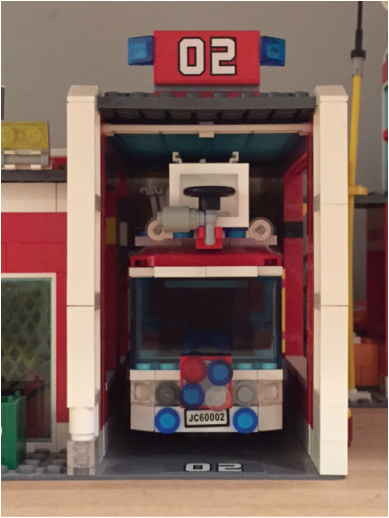 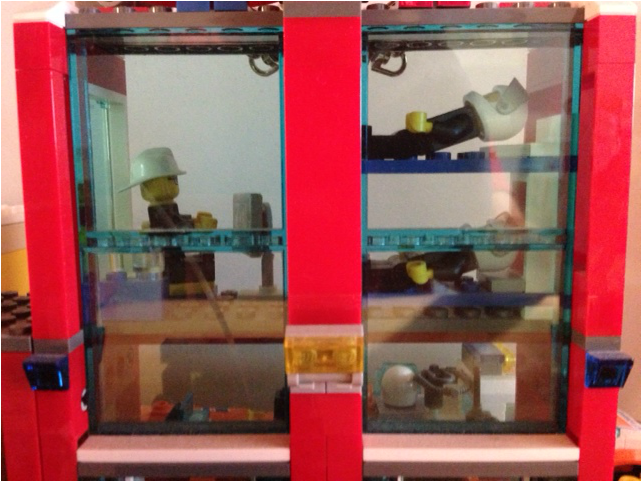 Firefighters on the second floor of the station sleeping and watching TV. 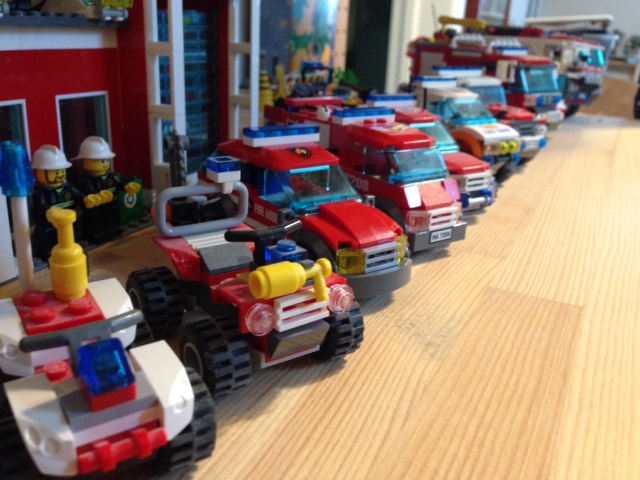 The companies in front of the bays.

Engines do the majority of attacking fires and the pumping of water at a fire scene.  They are each staffed by at least a firefighter and an engineer.  They have a pump, a tank, attack lines and supply lines, a monitor, and basic firefighting equipment (SCBA, ax, FD extinguisher, radio, K12 saw, etc.).  There are three engines in the RLFD.
A quint serves the purpose of a truck company and an engine in a single apparatus.  Quints have an aerial, a pump, attack lines, a tank, and ground ladders.  They also carry some extrication equipment for vehicle accidents in addition to basic firefighting equipment.  They are manned by at least an engineer, an officer, and two firefighters.  Quint 2 is the only quint in the RLFD.
Ambulance 10 provides prehospital care to patients.  It is staffed with two paramedics and carries ALS gear in order to function as a mobile intensive care unit.
Boats are used to fight fires on water and carry out water rescues.  The boat of the Royal Lego Fire Department is transported throughout the city on a custom-made flatbed truck.  It has one monitor and room for two firefighters and survivors.  The boat is staffed by an engineer and a firefighter.
The helicopter of the RLFD has three main jobs: medical transport, rescue, and brush firefighting.  It carries a 500-gallon tank which can be refilled in five minutes.  It is staffed by at least one pilot and one firefighter/paramedic crew member.  The helicopter is stationed at Royal Lego Airport, less than a mile from the station.
Command 1/Chief 1 are the RLFD's command units. Command 1 is staffed by the on-duty captain, the commander of the shift. Chief 1 is the fire chief's department-issue car, which he takes home at the end of his office hours. The command units have radios for the officer to communicate with his firefighters and surrounding agencies. 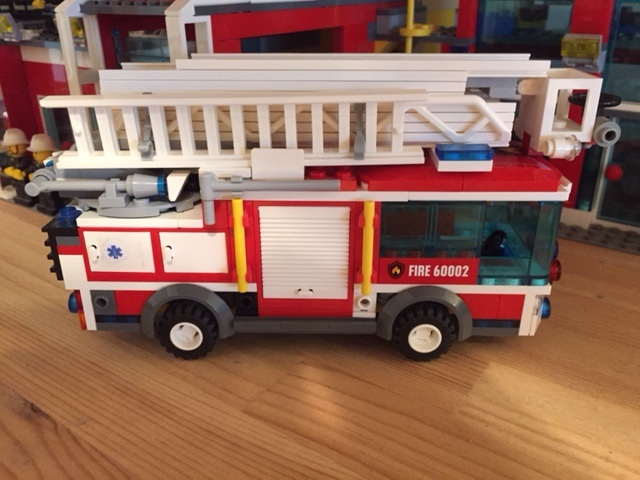 Quint 2 in front of the station.

Descriptions:
Probationary firefighters (probies) learn the ropes of firefighting during this time.  Before, they attended the state fire academy where they become EMT-Basic certified and complete state Firefighter I and II classes.  After they graduate, they are able to get a feel for all of the companies and their jobs in certain situations by riding along with each of them.  At the end of one year, they are assigned to a specific company.  Currently, there is one probie in the RLFD.
Firefighters and p​aramedics make up the majority of the department's personnel with 30.  They man almost every unit.  Firefighters can choose to get their paramedic certification and remain firefighters, but all RLFD firefighters become EMT-B certified while at the state fire academy.  Paramedics have the opportunity to advance and become a paramedic supervisor for the shift (lieutenant) and then the EMS coordinator for the department (captain).
Engineers drive apparatus, fly the helicopter, and pilot the boats.  They also may hold paramedic certification and rescue firefighter certification.  Their certification as an engineer must be upheld if they move up in the ranks and are required to drive an apparatus (ex. Engine 4).  There are seven engineers in the department.
Lieutenants are in command of a company and usually ride behind the engineer on the apparatus.  They may fill out incident reports and take control of the scene until a higher-up gets there.  The RLFD has 5 lieutenants.
Captains may also be in command of a company (example: Engine 4), but most command a station for their shift.  They fill out the majority of the incident reports and take control of the scene until a higher rank gets there.  Captains are distinguished by their silver helmets.  There are four captains, one for each shift and one who serves as the fire marshal/inspector and EMS coordinator.
Fire Chief is the highest rank in the RLFD.  His office is in city hall on the public safety floor.  He makes daily rounds to meet with the public and handles a meeting or two.  He has his own car with his own gear and also wears a gold helmet.  The fire chief works in his office 9-5, Monday through Friday.

﻿The Royal Lego Fire Department would be honored to enter into a mutual aid contract with your fire department!  Please fill out the application below and the fire chief will contact you soon.﻿

All of the photos that are posted on this website are copyright 2016 Salgoud Nayr.  If you are interested in using the photos on this website, the brickmaster of the Royal Lego Fire Department is willing to share higher-resolution photos with you.  To request permission to use photos, send an e-mail to rlfd1930@gmail.com with the subject being "photo usage permission".  The name Royal Lego Fire Department is copyright 2016 Salgoud Nayr.

The RLFD is not affiliated with the LEGO Group.

The Royal Lego Fire Department does not respond to emergencies.  For real emergencies, contact your local public safety answering point (PSAP).
Powered by